January 11, 2017
If one were to guess which is the most misused verse in the Bible, Jeremiah 29:11 would have to be one of the finalists. From children’s cartoons, to jewelry, to wall hangings, to bumper-stickers, we’ve surrounded ourselves with a verse plucked completely out of its context and provided it with a connotation that is actually entirely at odds with the message it is intended to communicate.


“For I know the plans I have for you,” declares the Lord, “plans to prosper you and not to harm you, plans to give you hope and a future.” (NIV) 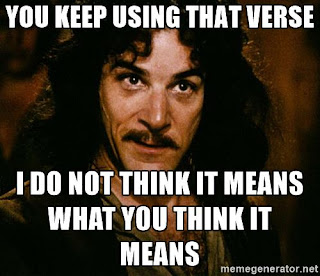 Isolated from its context, this sounds like a happy affirmation of God’s plan for your personal well-being. With a little bit of imagination, it might even serve to affirm God’s desire for your own wealth and prosperity, a la Joel Osteenism, but let’s take a closer look. The entire book of Jeremiah consists primarily of its namesake telling the nation of Israel that their continued persistence in idolatry and rebellion towards the one true God had earned them judgment. Jeremiah tells them time and again that they must accept the fact that they will be subjugated to pagan Babylon. The problem is that Israel didn’t want to hear it, and to say that Jeremiah wasn’t well-received is an understatement.

In Jeremiah 28, Hananiah began to falsely proclaim that Israel would be delivered from Babylon within two years, at which time their king would be restored, their exiles would come home, and even the temple’s treasures would be returned. To this false prophet, Jeremiah speaks in 28:15-16:

“Listen, Hananiah! The Lord has not sent you, yet you have persuaded this nation to trust in lies. Therefore this is what the Lord says: ‘I am about to remove you from the face of the earth. This very year you are going to die, because you have preached rebellion against the Lord.’” (NIV)

In that setting, we have chapter 29 which contains a letter that Jeremiah sent to those who were already living as exiles in Babylon. He tells them to “seek the peace and prosperity” of their new cities, and to settle in and build houses. He directs them to have families and prepare for their children to have families as well. (29:5-7). Jeremiah warns them not to believe the false prophets because it would be seventy years before the exiles return. Seventy years. Let that sink in. That meant that with perhaps a few exceptions, everyone hearing this message had been sentenced (because of their rebellion to God) to live out the rest of their lives as humiliated, conquered exiles in a pagan nation. They would never see their homeland again. Only then do we have 29:11’s promise for Israel’s future. It was a promise they would never live to see – a bitter pill to swallow.

What does it matter, though? Certainly, we can extrapolate from Scripture that God does have a plan for us as individuals. Certainly, we can conclude that God wants us to have hope and a future, and that He would not wish us harm. Or can we? The problem with misapplying these kinds of verses is that we build a very shallow view of God’s promises, and indeed His sovereignty as well. It seems pretty clear that in spite of God’s promise to bless future generations once they turned back to Him, the readers of this message didn’t come away with a personally warm and fuzzy view of God’s plan.

I’m not sure they would have been keen on adorning their walls with a promise for their grandchildren that could have been theirs if they hadn’t blown it. If we take Jeremiah 29:11 out of its context, we run the risk of sounding much more like one of the false prophets promising immediate relief, instead of Jeremiah the true prophet who spoke the unpleasant truth, even though he got tossed into a well for his trouble.

In an even broader sense, these types of errors threaten the integrity and credibility of the church’s system for reading and applying Scripture. If I can massage a feel-good message out of a passage declaring judgment (even if my conclusion might be generally correct according to other passages), I’ve replaced the objective foundation of Scripture with subjective human opinion. I’ve flung open the gate to serious error. However, even when we don’t go down the road to heresy, when nonbelievers see us play fast and loose with Scripture in the little things, it gives them cause to believe that when we cite Scripture as the rationale for our stance on an important doctrinal or moral issue, it’s just another way to enforce our personal opinions.

It’s time for us to take a critical look at how we use Scripture, and not just Jeremiah 29:11. The Bible’s message wasn’t meant to be reduced to bumper-stickers, or 140 character Twitter posts. However, Christendom abounds with verses that are misused, massaged, and mangled to say what we want them to say, and not what God meant to say. It needs to stop. We are mishandling the very words of God Almighty, and surely not without grave consequences.