January 01, 2016
Once upon a time it was the early nineties. It was a time when roaming evangelists occupied the pulpits of Evangelical churches on weekday revival nights, grasping the rapt attention of paranoid parents and pessimistic blue-haired ladies with tales of back-masking, secret satanic incantations hidden in popular music melodies, and CD’s blessed by witches.
Despite the hold that such goose bump raising, hair tingling sensationalism once had upon me, with time and maturity, I realized with some chagrin that these were just religious ghost stories, the evangelical Christian version of a cautionary fairy tale of witches and werewolves designed to control behavior with superstitious fear.
If I had hoped that the church has matured beyond these sorts of melodramatic schemes, I was reminded by way of a blog post warning of the dangers of certain adult coloring books, that every generation has its back-masking.
In an all too familiar form, the author adopts the posture of a wise and caring friend cautioning fellow believers about some hidden satanic aspect to a seemingly harmless popular new fad. The fad is certain adult coloring books which make use of a floral pattern that is supposedly connected to the practice of certain eastern religions. I won’t delve into whether or not the author accurately represents these religions (though I do have some doubts about that, since one of the symbols shown in the article is immediately recognizable as a rose window from a Christian Cathedral.), but I would like to challenge the Christians reading this to think critically about the idea that objects can somehow bring a person under demonic influence.
Consider for instance, this statement:
“Focusing on mandalas is a spiritual practice where you merge with ‘deities’–this practice opens the door to demons. The thing is, how is the devil going to get Christians to meditate on mandalas? No Christian would put one in their house and sit and stare at it for an hour, chanting the sacred word! But if the enemy can get a Christian to stare at a mandala because they are coloring it, he can have them absentmindedly focus their attention on the image and they will unknowingly open up their subconscious to this image in almost the same way.”
This person is claiming that spreading colored wax over a floral pattern created from ordinary ink and paper gives demons the power to covertly invade the life of a Christian who has committed himself to Christ, turned over his life to serve the Lord of the Universe, and is indwelt by the Holy Spirit. Is that really a Biblical stance? How weak must our God be in our minds to believe it?
Then there is this:
“When you think about how our brains zone out when we color anyways, this makes it even more interesting… The mandala itself is a receptacle for ‘deities’ and ‘universal forces.’ It is not just opening a door to the spiritual realm, it is knocking on the door of a false temple.”
Who is speaking here? A Christian, or a pagan? Both seem to agree that an empty ritual combined with an ordinary piece of matter (that God created) has the intrinsic power to connect with the spiritual world. Is that a Biblical position? 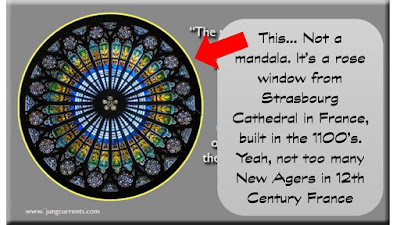 Interestingly enough we don’t have to speculate on the Biblical stance, because we have Paul’s treatment of the controversy around eating food sacrificed to idols in I Corinthians 8. Paul begins the passage by clearly stating that food that had been sacrificed to the false gods (idols) was not intrinsically different from ordinary food, because false gods are just that – false. Unreal. Without existence. Interestingly, Paul points out that it is the weak, not the pious who have trouble with this issue, because they treat the sacrifice as though it were something real. (verse 7) He cautions against consuming the idol meat to protect those who were too weak to treat the pagan rituals as what they actually are – empty and powerless.
If Paul had been a 21st century evangelical, he would have made a sensational post about how this devil meat was being sneaked into supermarkets across the country and exposing innocent Christians to demonic influence. Instead, in 10:23, he says to paraphrase, don’t ask whether the food was sacrificed to idols, and what you don’t know won’t hurt you.